On the evening of Monday the 8th of August 2011, violence and disorder came to Croydon in a fireball frenzy of looting. There were many large fires and buildings destroyed. Tesco, Somerfields, Lidl and Rockbottom guitar shop were all ransacked. Looting had been going on for several hours before police arrived. The small force had been occupied defending Croydon Whitgift Shopping Centre and there were no resources to tackle the unabated crime wave going on outside the central precinct.

In Purley Way, stores including Currys and PC World were all ransacked with looters seen loading wide screen televisions into their cars. This raid on Croydon was orchestrated and fires outside the centre has been set to try and draw police from the town shopping centre to leave it undefended.

The corner at the bottom of Church Street suffered the worst fire as the furniture shop Reeves, that has been a family business for 147 years went up in flames.  Several adjacent buildings were also destroyed. There were seven major fires, including the Tote and 5 adjoining buildings which were later demolished.

There was complete lawlessness on the streets as the authorities were outnumbered or absent altogether.  These photographs represent just a small fraction of the arson, thieving and mayhem that took place on that frightful and shocking night.

View the slide show without this text here. 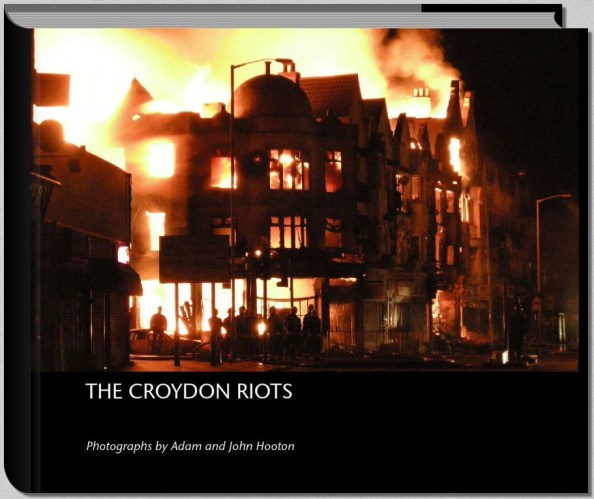 My son Adam took the photographs of the action taking place. I covered the aftermath at 5:00am.

Check out a short preview of the book here  The complete book contains 48 colour photographs.

THE CROYDON RIOTS – Photographed by Adam and John Hooton