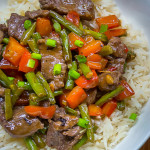 Known for being super tender, these flank steaks are served with steamy basmati rice and chilli with white wine vinegar, to give it that authentic hot and sour flavour combination. To make sure you are getting at least some of your five-a-day, we have added some fresh green beans, spring onions and red pepper! HelloFresh magic!

This recipe took about 25 minutes to prepare and cook. The chicken is marinated in lemon, herbs and spices, and served on a layer of chopped vegetables, lentils and chorizo. There’s no shopping as all the ingredients are delivered to your door in your ‘Recipe Box’. and recipes require the minimum of preparation because quantities are already measured and there is no waste. Cooking is easy because HelloFresh provide you with fully illustrated step by step recipe cards. 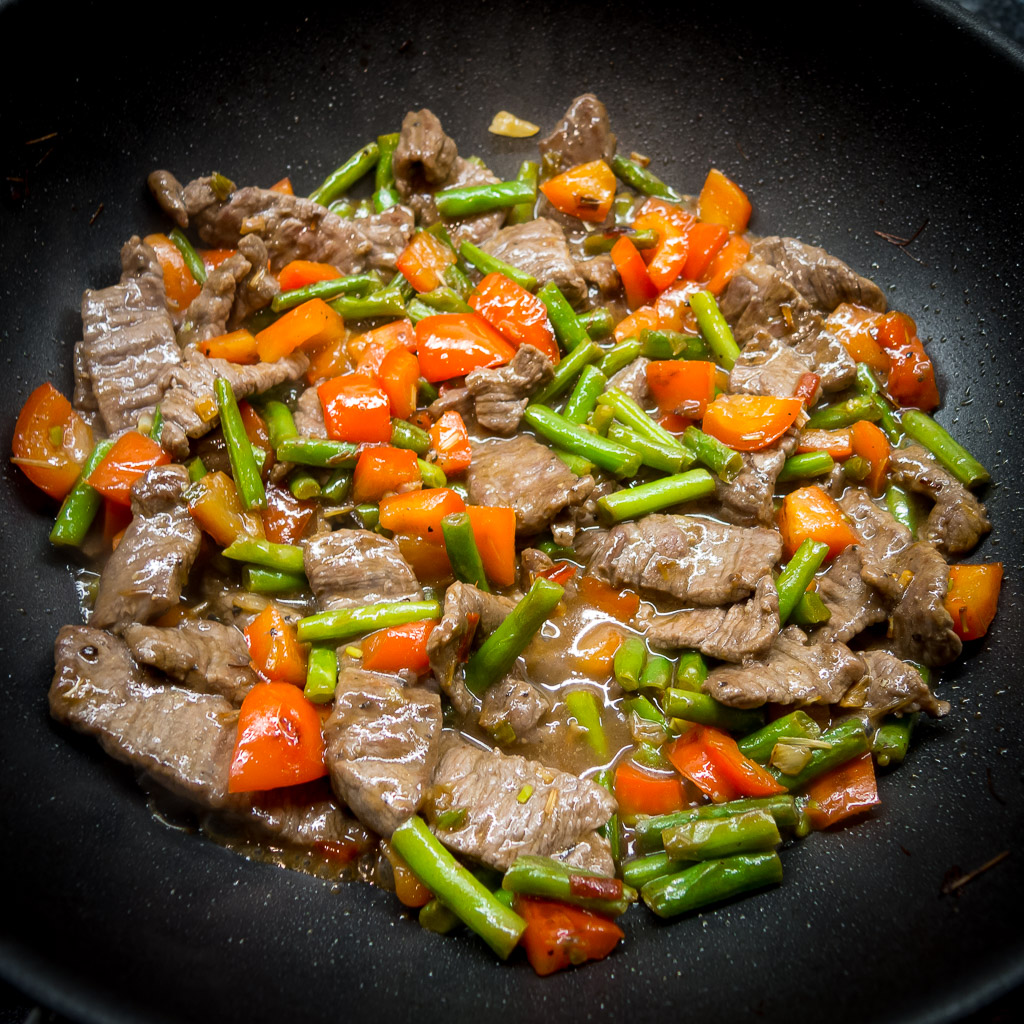 HelloFresh makes cooking fresh food at home a cinch. Recipes are changed every week, so you have new mouth watering menus. You no longer have to think about what you are going to eat, meals are planned for you by top chefs. If you are only having three meals a week, you can choose any three from the five recipes, and there are various packages to suit the size of your family.

Check out the recipe below, then head over to HelloFresh to try their delivery service for yourself. Bon appetit! 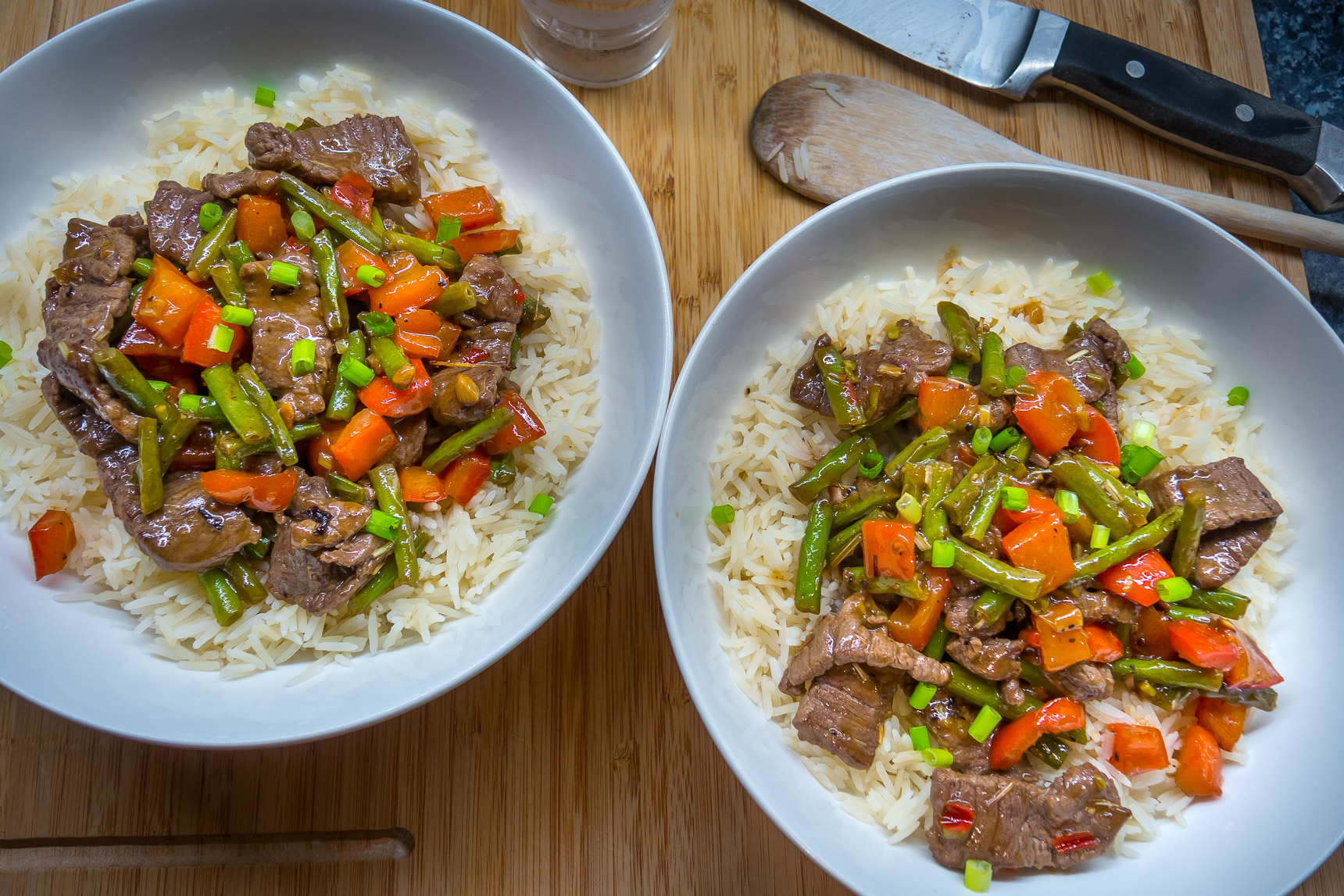 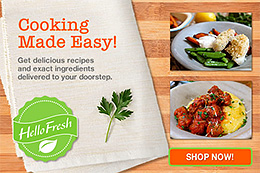 On a weekly basis HelloFresh delivers a box full of exciting recipes and appropriate as well as fresh ingredients directly to the customer’s home – discover now!

1. Boil 350ml of water with 1⁄4 tsp of salt in a pot. Once it comes to a boil add the rice and turn the heat to its lowest setting. Put a tight fitting lid on top and cook for 10 mins. Remove from the heat and leave to rest for another 10 mins. Tip: Do not peek under the lid until 20 mins are up or the rice won’t cook!

2. Meanwhile, chop your spring onions widthways into very thin (less than 1⁄2cm) discs and separate the white and green parts. Top and tail the green beans and chop them widthways into 3cm pieces. Remove the core from the pepper and chop it into (roughly) 2cm chunks. Finely chop the chilli and peel and chop the garlic.

3. Chop the tough base o the lemongrass and peel a couple of the outer layers. Take the bit in the middle and whack it with something heavy to break it up a bit (and release that awesome lemony smell). Very finely chop it for later. Tip: It’s important you chop, chop, chop the lemongrass to make sure it cooks perfectly.

4. Now slice the steak widthways into wafer thin strips. Toss the strips in a bowl together with 1⁄4 tsp of salt, a good pinch of black pepper and the cornflour.

5. Heat 1 tbsp of oil in a non-stick frying pan on high heat. Once the oil is nice and hot, gently place the steak strips into the pan and brown them off for 2 mins. Remove from the pan and keep to the side.

6. In the (now empty) frying pan, heat 2 tsp of oil and turn the heat to medium-high. Add the garlic, lemongrass, chilli and the whites of the spring onions and cook for 2 mins. Now add the green beans and red pepper, and cook for 5 mins (tossing them constantly).

7. Throw in the soy sauce, vinegar, 1/4 tsp of sugar (if you have some) and 3 tbsp of water, together with the steak and toss everything in the pan for another 2 mins.

8. Serve your stir-fry on top of the rice, with a sprinkle of the green parts of the spring onions and BOOM, you’re done!